Yellow Jackets Bad This Year – What Do You Do? 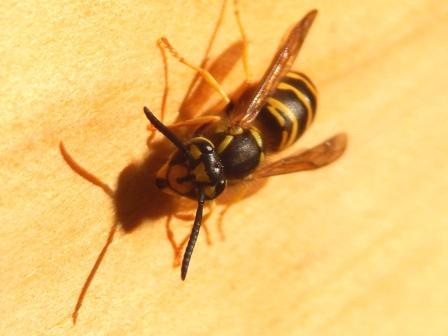 I should have posted this before now – it might be too late to do anything if you haven’t been checking your bees.

Folks have been reporting serious Yellow Jacket issues. Hundreds of them at the entrance overwhelming colonies’ defenses and killing the colony, sometimes even strong colonies. I had a hunch it was coming when the power line workers told me the nests were larger and more numerous than usual for time of year… months ago.

Part of it no doubt has to do with everything getting an earlier start this year compared to past years. Yellow Jackets start out in the spring with a single “bee” (or “wasp” technically) and build through the year… so the longer the year the bigger their nests can become. We all know that spring came more than a month early this year. The Yellow Jackets reach their peak in October, four months past the honey bees’ peak of growth. On top of that the honey bees have endured an unusually long dearth of forage and may not be in optimum condition.
Yellow Jackets will start flying earlier of a morning in cold weather, and can sneak into hives before the guards break cluster and get moving.

As far as I know I have not personally lost any colones directly to yellow jackets, although I do need to get out to a couple of the out-yards and check them again. I have probably squished a hundred or two around my hives here at the house with my fingers and hive tool (think of a Yellow Jacket’s thorax as a “kill me button”). When you have a little pile of dead yellow jackets it will attract more as a protein source and you can continue the slaughter.

Reducing the hive entrance is response #1. It is largely a battle the bees will have to be strong and brave enough to fight on their own. If your problem is with the larger beasts like European Hornets or Bald-faced Hornets, you can screen them out with hardware cloth. Locating and destroying the nests has its challenges and here is where skunks can be of help to us. Unfortunately finding a Yellow Jacket nest often happens when you are least expecting it and unprepared.
A good prevention measure is using yellow jacket traps in the spring. If you kill off the starting queens while they are few in number, you can prevent a whole nest from developing later.
Is there anything else you have found to help? Leave a comment below. I hope your bees make it and you don’t get stung up,