…and I thought spring came early last year! What this means for beekeepers… 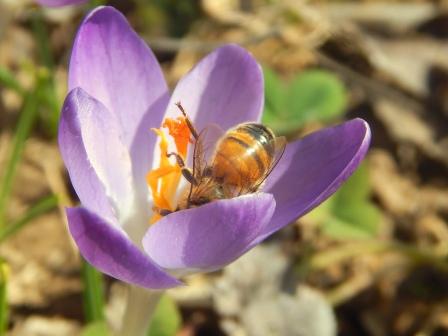 Snow crocuses in full bloom before Giant Crocuses even start.

Yes, we did have winter, just not as much of one as usual, and it feels strange to have spring happening in February – the middle of February!

On February 6 I saw a bee here and there entering a hive with whitish “pollen” pellets on its legs. So I caught a bee and took the pollen off its legs to look at it under a microscope and see if it was really pollen, and if so, if I could identify the plant it came from.

The substance the bees were gathering appears to be distinct grains of something rather irregular in size and shape but very smooth, mostly spherical, smaller than Maple pollen, and with a single dot or pore on most of the grains. My best [wild] guess is a fungus spore of some sort. 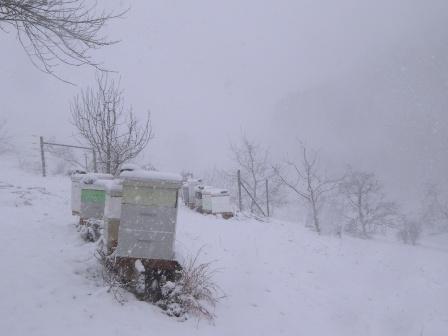 A little more winter came February 9. Inside these hives the bees are chowing down on pollen patties and raising brood.

Then on the 17th I checked our Hazelnut bushes and found honey bees nearly swarming them. They seem to respond more quickly to warm weather than other plants do. In past years the weather kept them dormant until about the same time as Maple bloom, and so the bees just ignored the Hazelnuts in favor of the Maples. Now, without maples to attract the bees, the Hazelnuts suddenly get quite a bit of attention!

At the bee hives, some bees were bringing pollen in, but not in abundance. I snagged two returning foragers, each one from a different colony, removed the pollen from their legs and released them. When I looked at the pollen under the microscope, from both bees it appeared to be some kind of tricolpate pollen grain, meaning it was not from Hazelnut. It appears to be the right size for Maple, but I could not be certain without having the pollen grains cleaned.

On the 20th of February the bees were bringing in loads of pollen like they “normally” start to do on March 20! “I don’t think there’s any way this is all coming from our few Hazelnut trees” I said to myself. I managed to harvest a few grams of pellets with one of my pollen traps, so now I can look at it under a microscope and see if they are visiting more than one type of plant, and if so, see how much they are getting from each type. The best way to do this is to send them to Texas and have at least 200 of the pellets dissolved and mixed, and then a subsample taken and treated and then returned for analysis. That way I can prepare and study a single slide and get a very good picture of the relative abundance of each pollen type to a high level of accuracy.

Under the microscope it looked like the majority of the pollen was coming from Maple. I took a hike on the 21st and although the buds on the Maple and Elm trees were swollen, they still looked rather tight. I don’t know of any Pussy Willow around, or any other soft maple species nearer than Salem. The bees are paying much less attention to the Hazelnuts now. Hmmm. There must be some Maples open somewhere. 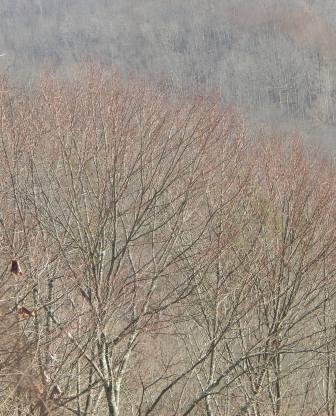 Tops of Red Maples at a distance on February 21 – just starting to get a reddish tinge. 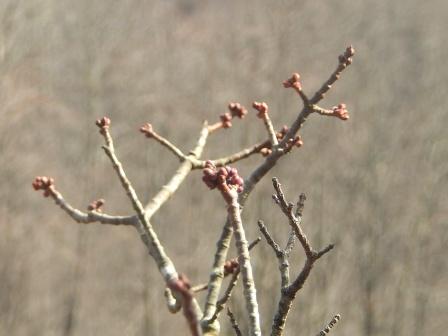 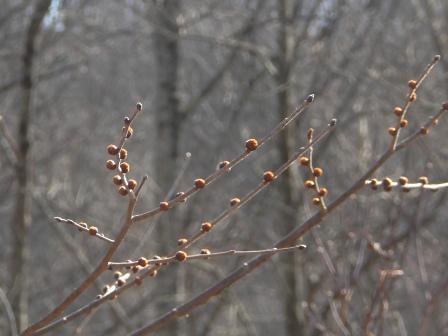 Elm buds also still rather tight, but it won’t be long.

This whole scenario could be deadly. If winter returns and a colony has produced a massive army to feed, they could run out of resources very quickly and starve. Some hives actually have like seven frames of brood – completely out of season for around here. Right now the forecast shows consistently warm weather. We could be feeding syrup – I would feed thick syrup only to those hives that are low on honey because I’m not confident in this weather keeping up. I don’t want a load of new splits with virgin queens to be stuck in single-digit weather! If I have to catch swarms in the snow, I’ll be sure to get some pictures. 🙂 Beekeepers, please watch your hives carefully and keep plenty of pollen patties and fondant on hand!